Home / Jewelers For Life
Previous  / Next

“Give me songs to sing and emerald dreams to dream, and I’ll give you love unfolding.” – Jim Morrison

There are few precious gemstones as lovely as the emerald. While there are other green gems, the emerald is considered the lushest and richest.

This green variety of beryl began being mined thousands of years ago, was cherished by Cleopatra, and became associated with places such as Ireland (the Emerald Isle) and Seattle (the Emerald City), among others. Read on to discover more about this green beauty, which is the sole birthstone for May and the symbolic gemstone for the 20th and 35th wedding anniversaries.

The emerald is a beryl, a mineral species that includes aquamarine, morganite, and several other gemstones.

There are other green gemstones, but emerald is known for its deep green hue, and is rich in saturation. In fact, many gemologists have argued over what classifies as an emerald rather than simply being considered a less-expensive green beryl. For that reason industry authorities such as the Gemological Institute of America use lab-graded comparison stones to determine if the green is saturated enough and dark enough to be called an emerald.

Emeralds are mined all over the world, most notably in South America, Asia (Russia), and Africa. 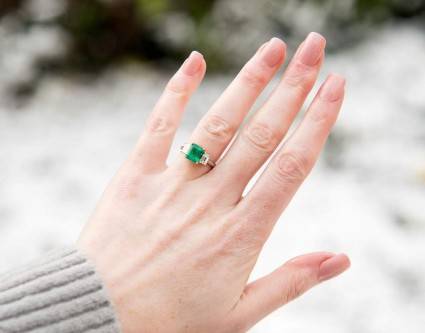 Emeralds arerelatively hard at 7.5 to 8 on the Mohs scale (but still less than a quarter of the hardness of a diamond). Because emeralds grow in what a gemologist would call a tortured environment, most stones have inclusions, fractures and surface-reaching fissures that can affect toughness and durability.

Though nothing greens as green as an emerald, it may not be the best engagement ring stone. You should always consult with a gemologist or reputable jeweler about sourcing, caring for, and cleaning your emerald jewelry safely.

Quality Factors for the Emerald

Similar to the diamond and other gemstones, color, clarity, cut, and carat weight combine to determine the quality of an emerald.

Color is a major quality factor. The darker (but not too dark) and more saturated the green, the higher quality emerald. The color should also be evenly distributed.

Carat weight impacts an emerald’s value. Because it’s less dense than a diamond, a 1-carat emerald will appear larger than a 1-carat diamond.

While an emerald can be found in various cuts such as round, oval, and pear-shape (among others), they are often cut as rectangular step cuts. The ‘emerald cut’ has become a very popular shape for diamonds and other gemstones.

Emeralds often have inclusions that are visible without a microscope, sometimes called an internal ‘jardin’, or garden. Because an emerald’s value comes so much from the color, most gemologists and jewelry wearers embrace the stone’s clarity or lack thereof.

Keep in mind that many jewelers sell synthetic emeralds as opposed to natural emeralds that were mined from the Earth, which greatly impacts the value of those stones. A natural, high quality emerald with beautiful color is rare, and therefore increases the value.

Emeralds have a rich history to match their beauty. 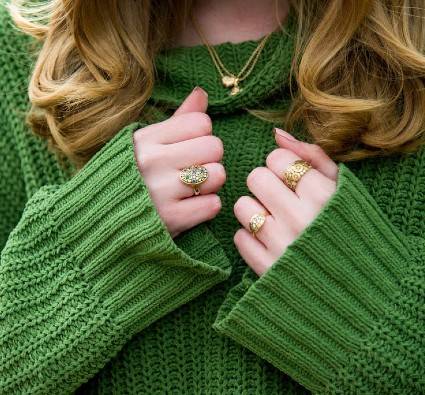 Throughout history there have been numerous famous emeralds, including Elizabeth Taylor’s emerald pendant that sold for $6,578,500 in 2011 and the Hooker emerald worn by Ottoman Sultan Abdul Hami II, the last sultan of the Ottoman Empire.

Additionally, iconic emerald jewelry has been worn by the British monarchy, Angelina Jolie, and many other royalty and celebrities.

You’ll find thatthe options are limitless for emerald jewelry, no matter your style or budget. It’s elegant in an unassuming pendant, or it can make a big statement on the red carpet.

Emeralds dazzle alongside diamonds in vintage Art Deco bracelets, classic pendants and bracelets, and three-stone or diamond halo rings. The rich green color does well with white gold or platinum and especially so with yellow gold, so go with whichever you prefer.

Consider setting an emerald in 18K yellow gold. The royal yellow will complement the rich chrome green of the stone, making the green even greener!

If you like modern designs, consider a ring with an east-west or bezel setting or pairing it with an unexpected gemstone such as an opal. Or select an emerald stacking ring to pair with a few of your other favorites.

Check out our emerald jewelry, whether you’re a May baby, are celebrating that 20th or 35th milestone anniversary, or simply love the color green!

Comments will be approved before showing up.