February is the shortest month of the year, but has one of the most popular birthstones assigned to it. People who love the rich, royal purple color of amethyst are ardent fans of this quartz variety.

From deep saturated purples to light purple hues (or even pink-to-lilac as in the Rose de France amethyst), the amethyst comes in a variety of color variations. Or if you prefer something different, bloodstone is also a birthstone for February babies.

Read on to learn more about amethyst’s rich history and the earthy qualities of bloodstone.

Amethyst has been a treasured stone for hundreds of years. Because of its dark purple color, Greek legends associated it with Bacchus, the god of wine. Still, the stone was believed to help their wearers remain clear-headed and quick-witted. In fact, the Greek word “amethystos” roughly translates to “not drunken”.

The stone also has Biblical significance, being one of the emblems of the twelve apostles.

Amethyst has appeared in religious and royal and coronation jewelry for centuries, belonging to bishops and kings and queens alike and becoming synonymous with wealth and abundance. It was a cardinal gem, and even Saint Valentine, the patron saint of love, wore an amethyst ring carved with the image of Cupid!

Many other religions consider the amethyst to be sacred. Buddhists make prayer beads out of it, and many believe it to be a powerful healing stone that reduces stress and encourages physical strength.

Amethyst can be cut in endless ways and designs.

Amethysts can be cut into the standard cuts

It is frequently cut into fancy cuts with multiple facets along the top and bottom without breaking. Some of these cuts include briolettes, pineapple, and starburst cuts, in addition to artistic free form shapes. 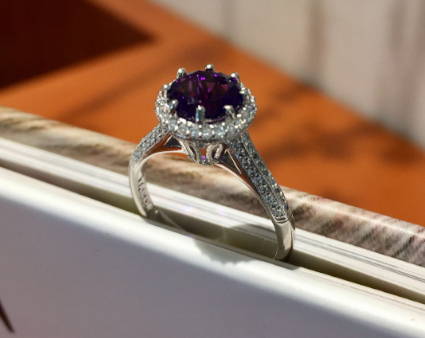 It can be fashioned into smooth beads or cabochon center stones with a high shine finish bringing out the natural growth structure or a transparent color, depending on the stone. 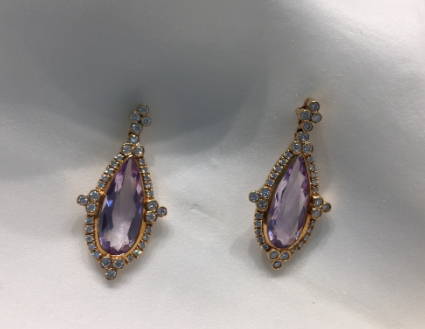 Some prefer the rough look of the symmetrical amethyst crystal with its mirror-like finish on some terminations and etched hydrothermal growth on others, or set into pendants, amulets or statement rings.

Amethyst rates a 7 out of 10 on the Moh’s scale of mineral hardness (about 1/8th the hardness of a diamond), which is a grading scale used by gemologists to assess the stone's hardness.

Because of its average to low hardness, amethyst is not a very durable stone. It is, however, appropriate for cocktail rings, earrings, pendants, brooches and other pieces of jewelry that are not exposed to heavy wear on a daily basis.

In the early 1900s new amethyst deposits were discovered in South America, making the stone much more widely available and accessible. It became a birthstone for February, and is now symbolic of the 6th and 17th anniversaries.

Today amethyst is a very popular gemstone, appearing in all types of jewelry styles from vintage jewelry to classic designs and current fashion trends. You’ll find amethysts in standard cuts such as round, oval, cushion and marquise, and fancy cuts with multiple facets as well.

Lastly, amethyst creates stunning color contrast when used with other quartz varieties and exotic stones, such as citrine and topaz. (Vianna Brasil’s necklaces are great examples.)

Bloodstone, an Alternative Birthstone for February

If you are seeking a birthstone that has more of a rustic, earthy feel, then consider the alternative birthstone for the month of February, the bloodstone. (Bloodstone is also claimed by March as a birthstone.)

Bloodstone is a variety of chalcedony and is also known as heliotrope, which means “sun-turner” in Greek. It offers bold coloring, deep green with red or reddish-orange flecks (hence the ‘blood’ in bloodstone).

You’ll see it most often in jewelry as cabochons in necklaces, bracelets, rings, and earrings.