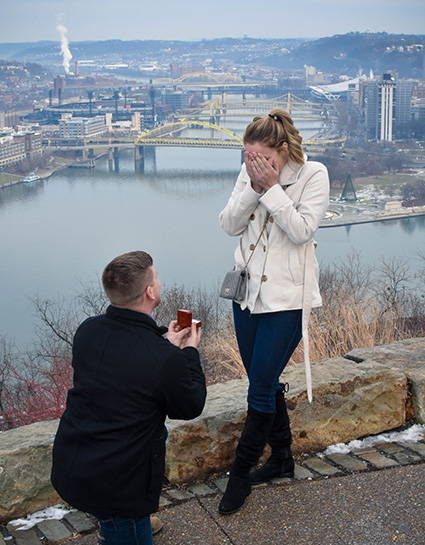 Vince and Katlyn met while attending Slippery Rock University and were immediately attracted to each other. It wasn't long before they were doing everything together.

Vince and Katlyn met while they were both attending Slippery Rock University in the fall of 2012. They were both immediately attracted to each other. After a brief period of time, they began talking and spending more time together.

Vince asked Katlyn to come home with him for a weekend to meet his family pretty early in the relationship. For Katlyn, it was interesting because she didn't feel nervous. She felt comfortable, and that's when she realized Vince was the one. They made it through a few years of long distance while in graduate school, but both agree that it made them appreciate their relationship much more.

The big day was December 17. They met a few of their good friends for breakfast and then made their way to the West End Overlook, where Vince got down on one knee and asked Katlyn to spend her life with him. One of their friends captured the moment on camera and on film!

Vince and Katlyn plan to continue living in Pittsburgh with their dog Louie and cat Lily, buying a house and getting married in the Fall of 2019.

Congrats to you both! We feel so privileged that you chose Henne and were able to share in the excitement of that amazing proposal. Wishing you well as you plan your wedding!