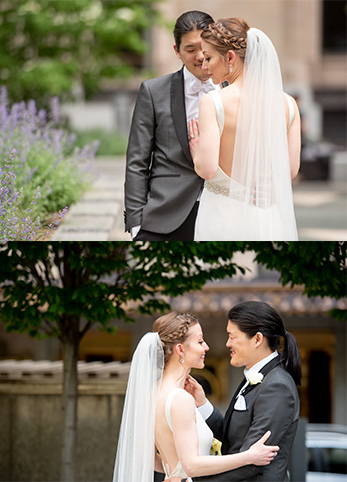 Once upon a time, Sarah's best friend (Emily) and Chris's best friend (Sunshine) were in the PsyD program together at the Indiana University of Pennsylvania, about an hour east of Pittsburgh. Chris had recently moved to the area to work as a family-based therapist. At the end of March 2014, Emily and Sunshine arranged for the 4 of them to spend the weekend together. While Emily and Sunshine got their hair and nails done, Chris and Sarah had some time to chat and get to know each other. It was there at the salon that they shared their first inside joke (road apples). Later that evening, they all went to a Cirque du Soleil show, and after that they danced the night away at Diesel in the South Side. The next morning, they all got brunch at the Omni William Penn Hotel. Then, 4 years and 2 cats later, they got married at the place where it all began!

Sarah and Chris were on vacation with Chris's family in May 2018. They flew into London on Wednesday, May 23 and saw Hamilton on Thursday, May 24. The show was so spectacular that if the trip had ended there, Sarah would have been more than happy. Little did she know that the best was yet to come...
On Friday, May 25, Chris, Sarah and his parents flew from London to Naples, Italy. From there they drove to Positano on the Amalfi Coast. Chris's sister, Michelle, joined them from Paris. Her company had done a feature on a couple who owned a hotel there (Le Sirenuse), as well as a villa nearby. That villa was going to be their home for the next 4 nights. With beautiful terraces overlooking the beaches below, they couldn't ask for more breathtaking views.
Late that first night, Sarah was sitting on the terrace with the rest of Chris's family (he had disappeared for awhile). They all knew what was about to happen, but she was still in the dark. Eventually, Chris reappeared and sat down next to Sarah. He said, "Do you want to go on adventures like this forever?", and when she smiled and nodded her head he got down on one knee. In shock, she darted a look at his mom on the other side of the terrace and saw that she was taking out her phone to capture the moment. That's when she knew that this was really happening! She eventually composed herself enough to say "yes," and just like that they were engaged!
Chris proposed with his grandmother's diamond ring, but their wedding bands came from Henne, as did their first anniversary gifts to each other! 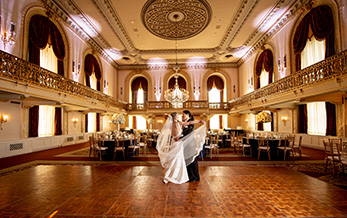 Chris and Sarah plan to continue going on adventures all over the world, side by side (when it is safe to do so again)! Vancouver and Hawaii are two of their favorite destinations, and they dream of permanently relocating to either of those places at some point in the future. Until then, Pittsburgh is where they are putting down roots. They also plan to continue buying presents for special occasions at Henne, of course!